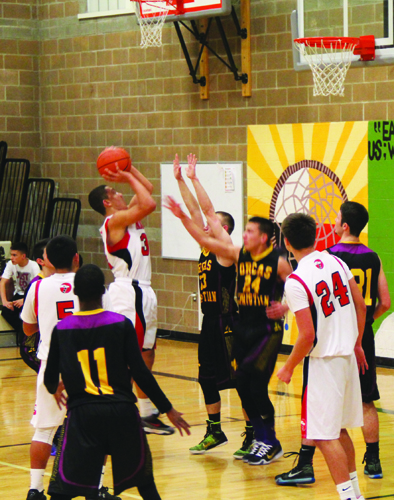 The Tulalip Heritage basketball team (5-5) hosted the Saints from Orcas Christian (6-0) at Francy J. Sheldon gymnasium on Monday, January 11. After the 1-5 start to the season, the Hawks had returned to their winning ways and were on a 4-game win streak that propelled them into 2nd place in their Northwest 1B league. The only team above them in the standings? The undefeated Orcas Christian team.

These teams previously played on December 10. It was a highly contested match that saw the Hawks lose a late lead as the referees took over the game and sent Orcas to the free throw line time and time again. The Hawks would lose the game 52-61.

Coming into the rematch the Hawks were confident they would avenge their previous loss and continue their win streak. Orcas Christian had other plans however. The 1st quarter yielded the worst offense output from the Hawks all season, just 5 points, as they trailed 5-12 going into the 2nd quarter. Whether it was due to the 2-3 zone Orcas applied that clogged the paint and forced the Hawks to keep the ball on the perimeter, or the Hawks missing close, albeit contested, shots at the rim, the Hawks just were unable to get into a groove offensively.

In the 2nd quarter, senior forward Willy Enick did away with the game plan and found his own offense through isolation plays and some timely shooting. Willy scored 8points in the quarter and had 10 of the team’s 17 points at halftime.

Trailing 17-27 entering the 3rd quarter, the Hawks looked to rebound quickly by putting more defense pressure on the Orcas points guard, Michael Harris. Unfortunately, that game plan didn’t come to fruition as Harris repeatedly was able to cut through the Hawks defense and either score a layup or find an open teammate for a quality look from 3-point territory. The Hawks would be outscored 6-27 in the quarter, making the score 23-54 going into the final quarter.

The Hawks would go on to lose the game 33-67, snapping their win streak. The 33 points was the lowest offensive output on the season. Willy led all Hawks scorers with 17 points.

Now, with a 5-6 record, the Hawks remain in 2nd place in their league but know they have work to do. They have to clean up the offense and defense if they want to have a good showing at the District Tournament next month, where they’ll likely face this same Orcas Christian team who has beaten them twice now.

The Hawks next home game is Friday, January 22, vs. the Lummi Blackhawks.