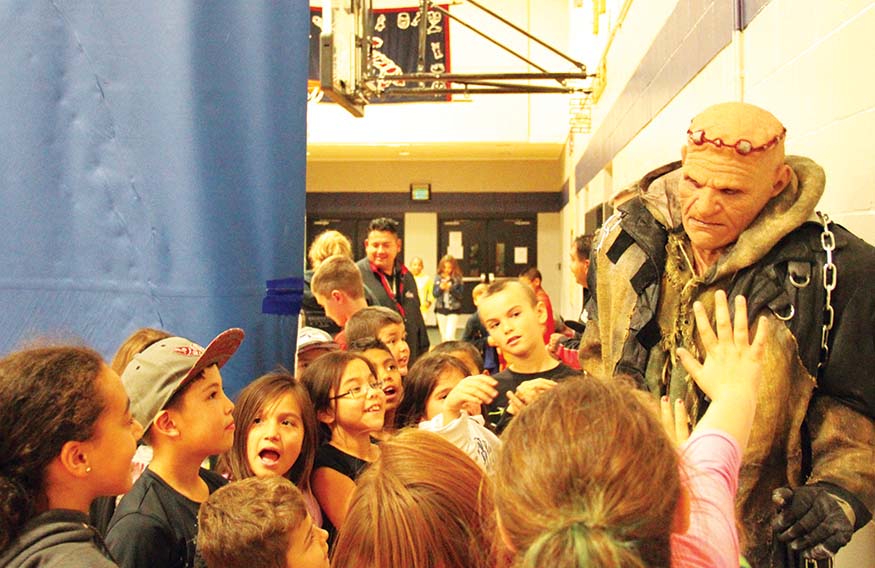 Kids meet Frank, a victim of bullying. Frank was featured in a video about bullying that was presented by Georgetown Morgue Haunted House staff members.

During the month of October, school assemblies are held nationwide to talk to America’s youth about bullying, a serious situation that unfortunately is often overlooked. Don’t Be A Monster! is an organization that is informing students, fourth grade and up, that the bullying issue is real. Too often bullying is brushed off like it’s no big deal. In many cases victims are somehow left responsible and sent off with the ‘sticks and stones’ mantra when searching for advice.

Traumatic scars, caused by bullies, were initially emotional cuts that were once quite deep. According to the program’s research, over 90% of kids are bullied in school. Amongst the youth in the state of Washington, suicide is the third leading cause of death. One of the main contributing factors to suicide is harassment from classmates.

The Georgetown Morgue Haunted House in Seattle participates in the program and sends their staff to local schools to help kids identify what bullying is and how to step up when one of their peers is picked on. As a perfect tie-in to Tulalip/Marysville Unity Month, the Georgetown Morgue team paid a visit to the Tulalip Boys & Girls Club on a chilly Friday afternoon.

“You know we have all kinds of monsters and ghouls at the haunted house, but you know those aren’t real. But there are real monsters out there, bullies,” stated Lynette, a Georgetown Morgue staff member, to the group of kids filling the Club gymnasium.

A video presentation about a new student, Frank, who is struggling to fit in was shown to the youth. Frank, based on Doctor Frankenstein’s’ creation, is trying to adjust to his new school, however, because of how he looks he becomes an outcast. The video portrays popular kids using cruel words to hurt Frank’s feelings. At the end of each scene, somebody stands up for Frank and tells the bully to stop. The video displayed different types of bullying such as physical, emotional, and its most recent form, cyber-bullying.

The presentation showed Frank logging into his Facebook account to a plethora of messages. Statements such as ‘nobody likes you,’ ‘go away,’ and the horrific ‘kill yourself’ are comments that are sadly left on kids profiles and comment sections daily.

Lynette attempted to project her voice over the kids who lost interest in the assembly by stating, “I knew somebody like Frank, who went to my high school, that was pretty much like that. He always smelled like urine, his clothes were filthy, his teeth were yellow. He walked the halls alone with his head down and nobody sat with him at lunchtime. Nobody was kind to him. It was terrible, but this type of stuff does happen, and…”

After several attempts to re-engage the youth in the topic at hand, Lynette’s statement would unfortunately remain incomplete because of constant interruptions from the kids. She stated that over half of her presentation was cut short as she gave up the battle for the youth’s attention. She called upon special guest Frank, the character from the video, to make a quick appearance as the kids exited the gym.

Despite the many interruptions, Lynette’s message is one of much importance. Kids and parents need to be aware and heed the signs of bullying to help prevent it.

The following information and more can found at www.stopbullying.gov.

Signs a Child is Being Bullied

If you know someone in serious distress or danger, don’t ignore the problem. Get help right away.

Signs a Child is Bullying Others

Why don’t kids ask for help?