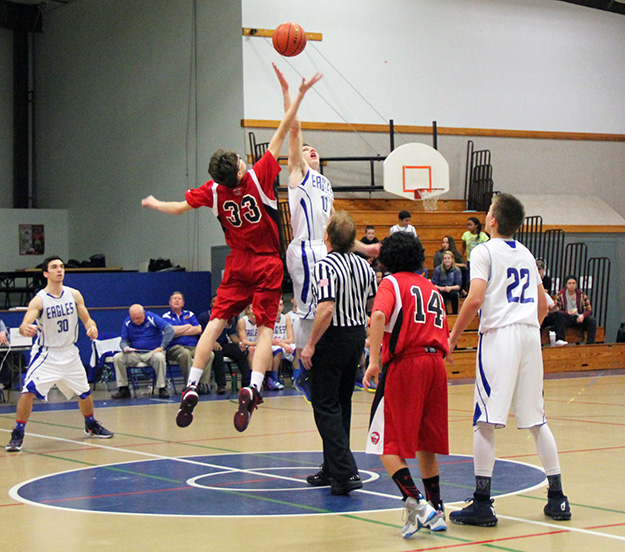 Coming off their best stretch of the season, a three-game win streak, the (6-9) Tulalip Heritage Hawks basketball team played at Grace Academy on Tuesday, January 24, to take on the (4-9) Eagles.

The Hawks came out like a team on a win streak as everything was going their way early. The offense was clicking and the defense was wreaking havoc. Tulalip took a 15-5 lead that they extended to 19-8 at the end of the 1st quarter.

In the 2nd quarter, the game dramatically changed when junior guard Josh Iukes, the primary playmaker for the Hawks, hit the deck and injured the wrist on his shooting hand. With Josh on the sidelines getting his wrist attended to, his team was out of sorts. Tulalip wasn’t able to muster any offense and got outscored 0-14 in the quarter.

Trailing 19-22 at halftime, the Hawks looked to get their offense going by playing through their big man, junior center Rodney Barber. Rodney quickly scored back-to-back buckets to give his team a 23-22 lead. Both teams traded two buckets each, tying the game up at 27-27 with one quarter to play.

In the 4th quarter, with Josh Iukes out of the game with the injured wrist, freshman guard Joshua Miranda did his best to provide offense. He hit two 3-pointers to give the Hawks a slim lead, but it wouldn’t be enough as the Eagles continued to execute their offense. Tulalip did their best to hold their own without their primary playmaker, but it was just too much to overcome. The Eagles won 41-38, ending the Hawks win streak.

Joshua Miranda led the Hawks in scoring with 12 points, Rodney had 9 points, and Josh Iukes and Nashone Whitebear each scored 6 points.

Three days later, the (6-10) Hawks traveled to Mountlake Terrace to take on the league’s top team, the (13-3) Lions from Cedar Park Christian.

It was a highly entertaining game as Tulalip refused to be intimidated by the bigger Lions squad. Even with Hawks big man, Rodney Barber, in foul trouble seemingly the entire game, the Hawks were undeterred. The guards kept attacking the rim and the forwards did their best to grab rebounds.

The Hawks never led outside of the 1st quarter, but even so they kept themselves within striking distance. The size advantage and Rodney’s foul trouble were factors, but just a couple more makes and the Hawks could have scored a big upset over Cedar Park. Tulalip lost a close one, 58-65.

After a forfeit by Arlington Christian, the Hawks (7-11) hosted the (3-9) Providence Classical Christian Highlanders at Francy J. Sheldon gymnasium. The game marked the end of the regular season.

In their final home game, Tulalip fans came out and cheered loudly for their Hawks team. Center Rodney Barber had the game of his life as he started out red hot from the field. Recognizing Rodney’s huge height advantage over the smaller Highlander team, the Hawks ran their offense through their big man and he did not disappoint. He scored 13 points in the opening quarter. With guard Josh Iukes’ wrist on the mend, he added a few jumpers that gave his team a 20-8 lead.

The Hawks continued to light up the scoreboard in the 2nd quarter, outscoring the Highlanders 18-6, and taking a commanding 38-14 lead into halftime.

Rodney continued to take advantage of his mismatch and scored three more quick buckets to start the 2nd half. That would be all that was necessary as Tulalip went on to win a decisive one, 68-43. Barber finished with a season high 24 points, while Josh Iukes and Nashone Whitebear each added 9 points.

The victory upped the Hawks record to (8-11) and ends the regular season on a high note. Winning five out of their last seven games secured the Hawks a spot in the District 1B playoffs. They will travel to Mt. Vernon Christian on Tuesday, February 7 to play the hosting Hurricanes at 8:00 p.m.