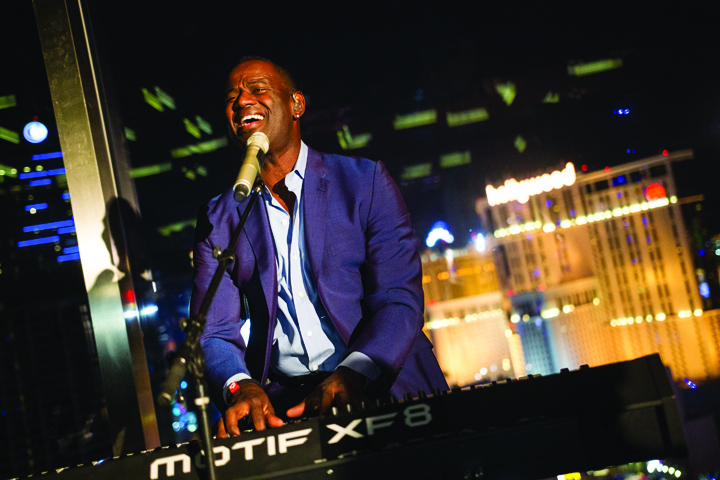 With over 20 million albums sold worldwide and 16 Grammy nominations, singer, songwriter and producer Brian McKnight is a genuine music icon.  Twenty successful years in the music industry – collaborating with everyone from Christina Aguilera to Quincy Jones to Justin Timberlake – is a rarity in the modern age of catchy, commercialized radio hits and party music that all sounds the same. Flash in the pan artists who derive success from YouTube hits and a popular-today hook come and go, but those who can serenade an audience have legend status.

Sticking to his true, soulful R&B roots have led to a twenty-year, sixteen album journey that echoes in the sounds and lyrics of McKnight’s heart-felt music. Now, 26 years after signing to his first record label, McKnight is still amazed to be doing what he loves most, making music.

“I never thought in my wildest dreams I would have this kind of career,” says McKnight. “I’m so grateful to have my fans behind me, still supporting me, and to still live this dream every day. And because of that, I am better.”

While gearing up for the long-awaited release of his 16th album, Better, set for worldwide release in January of 2016, McKnight is currently touring the U.S. before making his way overseas. The Tulalip Amphitheatre was fortunate enough to book the talents of Brian McKnight as part of the Tulalip Resort Casino’s summer concert series. McKnight will be sharing the stage with Boyz II Men on Thursday, August 6 in front of a sell-out crowd of faithful fans.

McKnight took some time out of his busy travel schedule to answer a few questions for the Tulalip News readers:

Where does this interview find you today? (Friday, July 24)

How has your summer tour shaped up thus far? What has been the highlight of the tour?

BM: The summer has been great. Normally I take off most of June and July to play pro am basketball, but now things are starting to get busy again.

When did you know you wanted to be a performer in the music industry? How did that decision come about?

BM: In my family, being musical is just like walking and talking to us. Once my brother made it in music I knew it was possible for me, so I went for it.

It has been over 20 years since you released your debut album in 1992. What motivates you to keep performing and remain in the music industry?

BM: My fans! If they ever stop wanting to hear me and see me, that’s when I’ll have to evaluate what to do next.

Who were some of your biggest role models that you looked up to in the beginning of your career?

You’ll be performing at the Tulalip Amphitheatre on Thursday, August 6 with Boys II Men. Can you tell us what audiences can expect from this performance?

BM: Two acts that sing and perform their behinds off along with twenty-plus years of hit after hit, after hit songs.

Are there any unique thoughts and/or feelings you have when it comes to performing on a Native American reservation?

BM: There aren’t specific thoughts, but it’s always an honor when I do.

Think you’ll find time to play some slot machines or table games at the Tulalip Resort Casino while you’re in town.

BM: I’m not much of a gambler, but you never know!

Your 16th studio album, Better, comes out in January. Will you be performing any songs from that album at the Tulalip concert?

BM: Probably not. I have so many songs that I’m expected to sing that it can be hard to get people to pay attention to something they’ve never heard before.

Throughout your career you have collaborated with artists from seemingly ever genre of music. Who would you love to collaborate with that you haven’t yet had the opportunity to do so?

BM: I’m willing to work with just about anyone as long as we have the same goals in mind; creating something great.

I’ve read that you have been making music and performing songs with your sons, Niko and Brian Jr. As a father, how does it feel to see your kids follow in your footsteps and embrace music as an art form?

BM: It feels really great to know they have something they’re really passionate about and they are really good at it too!

What is the most outrageous fan interaction you’ve ever had?

BM: A really pregnant woman in a car chase with me just to get an autograph.

What is your way too early prediction for the 2016 NFL Super Bowl?

Who is currently in your playlist? Any artists or genres we would be surprised to find there?

BM: I really truly listen to just about everything. If someone is making it there’s something you can learn from it.

What’s on tap next for you? What are you most excited about?

BM: My new CD is done but it won’t be released until January. I’m really excited for everyone to hear it! 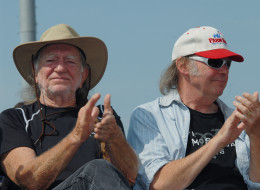 Aug 18 (Reuters) – Veteran musicians Willie Nelson and Neil Young are teaming up for a benefit concert in Nebraska to raise funds in the fight against land being sold for the Keystone XL oil pipeline project, charity organization Bold Nebraska said on Monday.
,
Nelson, 81, and Young, 68, both known for their ties to country rock and folk music and their environmental activism, will perform at the “Harvest the Hope Concert” on Sept. 27 at a farm near Neligh, Nebraska.

The farm is owned by Art and Helen Tanderup, who are campaigning against selling their land to TransCanada Corp to lay a pipeline that would carry crude oil from northern Alberta to refiners in Texas.

“Our family has worked this land for over 100 years. We will not allow TransCanada to come in here and destroy our land and water for their profit,” said Tanderup.

The concert is being hosted by Bold Nebraska along with Indigenous Environmental Network and Cowboy & Indian Alliance, comprising agricultural and tribal landowners who believe the pipeline will negatively impact the environment.

The Nebraska Supreme Court will hear arguments next month in a dispute over the planned 1,200-mile (1,900 km) planned route for the controversial $5.4 billion pipeline. A court ruling is not expected until 2015.