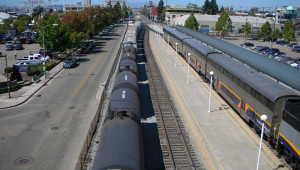 The Northwest would see more oil trains like these under proposed rail-to-ship terminals on Washington’s Grays Harbor. That’s the subject of public hearings Thursday and Tuesday. | credit: Flickr

Environmental regulators in Washington state are expecting a lively crowd Thursday in the coastal city of Hoquiam, where the public gets a chance to weigh in about increased crude oil train traffic.

Developers are proposing side-by-side marine terminal expansions on Grays Harbor along the Washington coast. They would receive crude oil by rail from the Northern Plains and send it out by barge and tanker to West Coast refineries. This would add to the already fast-rising number of crude oil trains crossing the Northwest. Environmentalists, shellfish growers and coastal tribes are organizing in opposition.

But one powerful state senator asserts that oil trains are “going to be with us for a while.” Republican Doug Ericksen represents a district in northwest Washington that is home to two oil refineries.

“Simply saying no — coming to a meeting and saying we just don’t want any oil coming through Washington state — that’s not realistic. It’s not going to happen. That would actually be devastating to our economy, trying to prevent these crude oil stocks from moving to our refineries,” he said.

Ericksen agrees oil train safety is a legitimate concern. Environmental campaigners argue many of the rail cars carrying crude across the region are old and unsafe and pose grave risks to rail-side communities.

The City of Hoquiam and Washington Department of Ecology are jointly leading the environmental review of the planned crude oil terminals in Grays Harbor County. The public can take a look at the proposals and offer comments at Hoquiam High School Thursday from 5 to 9 p.m. A second public meeting is scheduled for April 29 at Centralia High School.

This was first reported by the Northwest News Network.