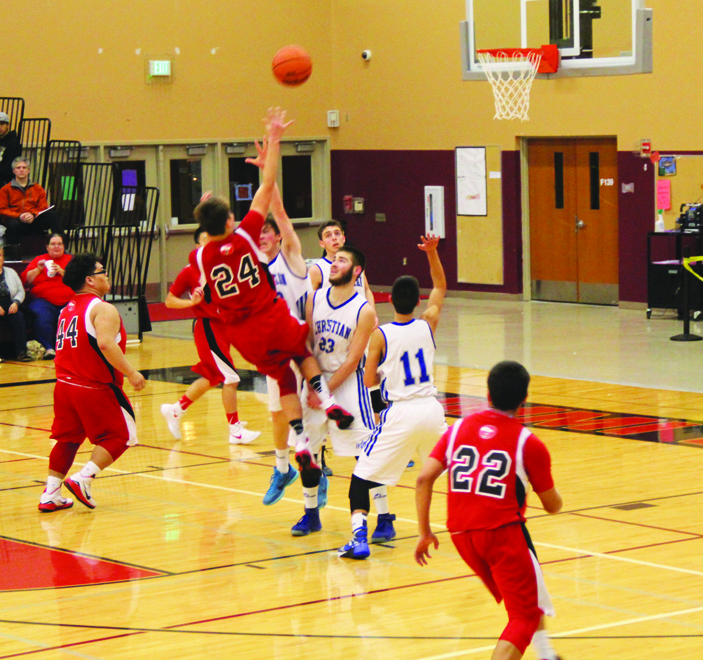 Tulalip Heritage Hawks vs. Mt. Vernon Christian Hurricanes in the second round game of the District 1B boys basketball tournament.
Photo/Micheal Rios

The Hawks (13-8) traveled to Lummi High School on Saturday, February 6, to take on the Mt. Vernon Christian Hurricanes (10-11) in a second round game of the District 1B boys basketball tournament.

Unfortunately, it only took three minutes of game time to see the Hawks were in deep trouble. With 4:50 remaining in the 1st quarter, seniors Willy Enick and Robert Miles collided at mid-court. Both players were attempting to pick off a long outlet pass and had their eyes on the ball, which led them running full speed into each other. Both players fell to the floor and the unintentional collision led to Willy suffering a laceration to his lip. Unable to get the bleeding under control, Willy was helped off the court, taken to get stitches, and unable to return to the game.

Without Willy, the bulk of the Hawks offense and playmaking went onto Rob’s shoulders. It took a while for Rob to find his offense, as he started the game shooting 1-7 from the field. In the final two minutes of the 1st half he was able to score a quick 9 points, giving him 13 at halftime with his team trailing 24-31.

In the 2nd half, the Hawks gave a good fight, but their lack of interior size and rebounding gave the Hurricanes many offensive rebounds and extra possessions. Rob continued to do what he could on offense, even putting on a one man show by scoring 22 points in the 2nd half. Josh Iukes chipped in 7 points down the stretch, but it wasn’t enough to overcome all the point blank shots and layups the Hurricanes continued to get.

When the game ended, Rob led all scorers with a season best 35 points, but the Hawks would take the loss 57-67. The Hawks have a few games off before their play-in game to the Tri-District Tournament and the hope is Willy will be able to play in that game. The Hawks need all the playmaking they can get in order to advance and keep their season alive.