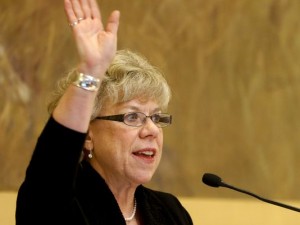 HELENA – Indian plaintiffs who sued in federal court to force the Montana secretary of state and three rural counties to open satellite voting offices on remote reservations have settled the lawsuit out of court.

Under the agreement, the three counties agree to open satellite voting locations on three reservations and pay plaintiffs’ attorney fees in the amount of $75,000. In a separate agreement, the state agrees to pay an additional $25,000 in attorney fees, according to Secretary of State Linda McCulloch.

“I pledged to help assist the tribes and the counties to make this all work,” McCulloch said.

Both sides hailed the agreement as a win.

Northern Cheyenne tribal member Mark Wandering Medicine, along with 11 other Indian plaintiffs, in February 2013 sued McCulloch and county elections officials in Blaine, Rosebud and Big Horn counties, alleging the defendants violated portions of the federal Voting Rights Act, which “prohibit voting practices or procedures that discriminate on the basis of race, color or membership in one of the language minority groups.”

The plaintiffs argued their rights to equal access to voting were violated when McCulloch and county elections officials refused to set up satellite voting offices on remote Indian reservations in advance of the November 2012 presidential election.

The U.S. Department of Justice’s Civil Rights Division, the ACLU of Montana and the national ACLU Voting Rights Project filed court documents supporting the plaintiffs’ claims that tribal members living on the Crow, Northern Cheyenne and Fort Belknap Reservations are at a voting disadvantage compared to white voters in Rosebud, Blaine and Big Horn counties.

The plaintiffs argued that the only late-registration and early voting options available to them between the close of regular voting registration and Election Day is at county courthouses in the white population centers. In some cases those courthouses are more than 100 miles round-trip from where most tribal members live, making it difficult for many impoverished Indians to register late and vote after the regular registration deadline.

The case was set to go to trial June 30.

In a settlement agreement reached Tuesday, the counties agreed to open satellite county election offices beginning Oct. 7. Those offices will be open on the reservations two days a week for tribal members to register late and cast absentee ballots in person.

During those days the voting offices will not be open at their normal locations in the county seats.

Alex Rate, attorney for the Wandering Medicine plaintiffs, said the settlement agreement is a bit step toward the goal of achieving voting equality on the reservations.

“Given the history of discrimination against Montana’s first peoples, we believe that everyone should have equal access to the ballot box, and this agreement is a giant step towards reaching that goal,” Rate said. “Further, this agreement validates the central pillar of Section 2 of the Voting Rights Act: that Indian voters must have an equal opportunity to participate in the political process.”

Bret Healy, a South Dakota-based Indian voting rights consultant with Four Directions, called the settlement a big victory for Indian voting rights but said the underlying technical issues that are preventing the state and counties from opening full-fledged satellite voting offices still need to be addressed.

“The final solution that we think is the appropriate one is to wrestle the technology obstacle to the ground so a satellite office is open five days a week as well as the county voting office,” Healy said.

The defendants argued that the plaintiffs’ demands for satellite voting offices were not allowed under Montana law, which requires each absentee ballot to be issued in sequential order using paper ballots that are prenumbered. The ballot number an absentee voter receives is determined by a complex, statewide computerized system that is not programmed to issue ballots from more than one location, the defendants said. Due to Montana law, as well as technical impossibilities with the statewide computer system, satellite offices were not an option, they argued.

“Because what the plaintiffs sued for was not something they could obtain, Blaine, Big Horn and Rosebud counties offered the plaintiffs an alternative,” said Sara Frankenstein, the attorney representing the counties in the litigation. “The three counties have offered to move their election offices for two days a week from its normal location in the county courthouse to a tribal facility on Indian reservations during the 30-day early voting period. The three counties are looking forward to working with their respective tribes on that issue, and are happy to address plaintiffs’ concerns with an alternative method that is actually legal and possible, and at the same time will cost the county very little to provide.”

Healy said the Secretary of State’s Office needs to work to address the technology hurdles in order to give tribal members on the reservations full equal voting opportunities.

“The bottom line is Native American voters on these reservations are going to go from zero days of equality and late registration and absentee balloting opportunities to at least a strong step forward,” Healy said.

McCulloch said counties will not be able to have two voting offices open simultaneously under current state law.

Healy said with this “inelegant fix” in place, Four Directions will work with other tribes across the state to request similar arrangements in their counties while at the same time continue to advocate for full satellite voting offices on the reservations.

“It simply defies belief that in this day and age we can’t have main voting office and satellite offices open and running five days a week,” Healy said. “The only reason that hasn’t happened is because nobody has rolled up their sleeves and tried to fix this.”

Walsh to hold hearing on the challenges to voting

Montana Sen. John Walsh on June 25 will chair a Senate Rules Committee hearing examining the hurdles voters in rural areas face due to long distances to polls, lack of easy access to mail voting and the lack of infrastructure. The committee will also hear about ways states have tried to make voting easier for people.

Walsh’s office said he organized the hearing in response to the concerns he heard from people across Montana, particularly in Indian Country.

The hearing title is “Election Administration: Examining How Early and Absentee Voting Can Benefit Citizens and Administrators.”

Witnesses at the hearing include:

• Larry Lomax, of Nevada, a former member of the Presidential Commission on Election Administration.