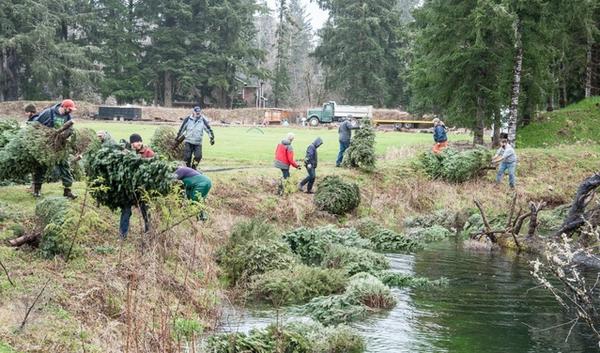 Members of the Tualatin Valley chapter of Trout Unlimited toss used Christmas trees into a side channel of the Necanicum River on the Oregon Coast. | credit: Michael Ellis

Most Christmas trees get kicked to the curb and ground up into mulch after the holidays. But a Portland-area conservation group is trying to change that.

Next month, they’re launching the third year of a program they call Christmas for Coho. They’ll collect used Christmas trees on three Saturdays in January and place them in the Necanicum River, coastal stream in northwest Oregon.

There, once submerged in water, the dying trees will take on a whole new life.

Michael Ellis, the group’s conservation director, said the trees provide valuable woody debris that salmon can use to hide from predators.

“It’s pretty incredible. We’ll be putting trees into the Necanicum River and you can actually observe fish flocking to these trees,” he said. “They’re just looking for this kind of cover.”

The trees also feed microorganisms that attract other critters for baby salmon to eat before they head out to sea.

Coho Sanctuary is one of the wetlands where the group has placed trees. Its owner captured underwater videos of young coho salmon swimming through the habitat.

Ellis said the group has found lamprey and other wildlife using the habitat, too.

“We’ve seen salamander egg masses being laid on the Christmas trees,” he said. “So we believe it’s really enriching the environment quite a bit for just about everything that uses the wetland. It’s pretty neat, really.”

Ellis’ group will be collecting used Christmas trees on January 3, 10 and 17 from 9 am to 4 p.m. at two fly-fishing shops: Northwest Fly Fishing Outfitters in Portland and Joel La Follette’s Royal Treatment in West Linn.

The group requests a $10 donation to cover the cost of transporting the trees.