The U.S. Army Corps of Engineers has announced which environmental impacts it will consider in its review of the Millennium Bulk Terminals coal export project in Longview, Wash.

The Millennium project would export 48 million tons of coal a year to Asia. It would ship the coal by rail from Montana and Wyoming to a terminal in Longview, where it would be loaded onto vessels and sent overseas.

In a 12-page memo, the Corps on Tuesday outlined which parts of that process it will consider in reviewing the project’s environmental impacts to the air, water, wildlife and people.

Despite requests from the public to include broader impacts of mining, shipping and burning the coal, the Corps is limiting the scope of its environmental review to the project site.

Washington state recently announced it will include a wider array of environmental impacts in its review of the project.

The decision comes after public agencies collected more than 200,000 comments from the public. Many people asked the Corps to consider the impacts of railroad traffic congestion along the entire delivery route, as well as the pollution created by mining the coal and burning it in power plants overseas.

But in its memo, the agency says:

“Many activities of concern to the public, such as rail traffic, coal mining, shipping coal and burning it overseas are outside the Corps’ responsibility.”

Instead, its environmental review will be limited to the 190-acre project site and the immediate vicinity around Longview. It includes about 50 acres of the Columbia River, where the project would build piers and dredge for ships.

In addition to environmental impacts, the review will also look at the jobs and tax benefits created by the project as well as the demand on public services and utilities.

When the Corps completes its review, the public will be invited to comment on a draft document. A final environmental impact statement will outline what the developer needs to do to offset the impacts of the project.

A $640 million terminal that would eventually export 44 million tons of coal at a private brownfield site near Longview, Wash. It’s a joint venture of Australia’s Ambre Energy and Arch Coal, the second-largest coal producer in the U.S. 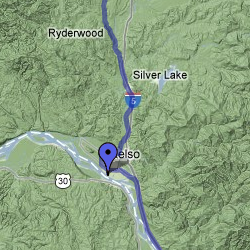 What’s Next: On Feb. 12, 2014 the Washington Department of Ecology announced what environmental impacts it will consider in its review of the Millennium Bulk Terminal. In September 2013, U.S. Army Corps of Engineers announced split from what was to be a joint review process. They will conduct a “separate but synchronized environmental review and public scoping process.” The corps’ review will be narrower in scope than that of Washington state. For more information on how to submit comments and to learn details for the public meetings visit the official EIS website.