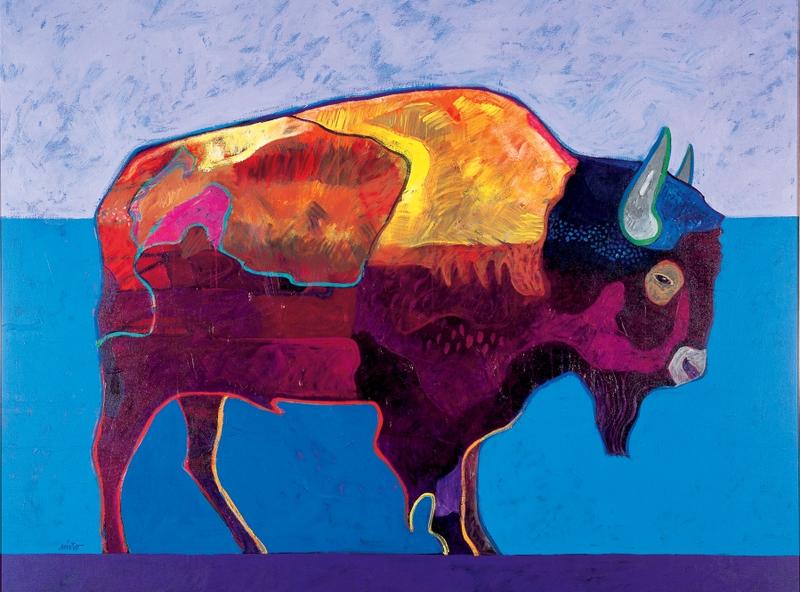 Images of the American West line the walls of a brand new addition to the Tacoma Art Museum. The collection, a gift from a German family with ties to the Northwest, is a once-in-a-lifetime acquisition that is raising the museum’s profile.

The transformation of the Tacoma Art Museum over the last two years began with a phone call between the museum’s director and the lawyer for Erivan and Helga Haub. The museum was looking for a donation to help with the redesign of its lobby. But Laura Fry with the museum says the Haubs, through their lawyer, made an incredible and unexpected offer.

“He said, ‘Well, would you be interested in their collection of Western American art?’” Fry said.

That conversation resulted in the new 16,000-square foot addition designed by Tom Kundig. It houses four galleries that contain what is now one of the top collections of Western American art in the world. The collection boasts 295 paintings and bronze sculptures, 130 are currently on view. The Haubs also gave money for the construction of the new wing and set up endowments for 10 new positions, including Fry’s, who is the collection’s curator. “This is the biggest donation of artwork in the Tacoma Art Museum’s History,” said Fry. “In 79 years of operating, this is our single biggest gift. So this really does transform the institution.”

By this point, you’re probably wondering: Who are the Haubs?

“Erivan and Helga Haub are from Germany. They also have a home here in Tacoma and a ranch in Wyoming,” said Fry.

The Haubs made billions in the grocery store business. They came to the U.S. after World War II and honeymooned near Tacoma. Because the medical care was better here than in Germany at the time, all three of their children were born at Tacoma General Hospital.

In a video produced by the museum, Erivan Haub says his dream of seeing the American West started when he was young and read books by Karl May. The stories glorified the plains Indians of the American West. They were as popular in Germany at the time as the Harry Potter series is today.

“The story of the west I had learned long before I ever came to the west through Karl May who was a famous German author that made me hungry to get to see this and to get to experience it myself. So we made it to America and never regretted one moment of it,” said Haub.

Fry points to a painting, two feet tall and three feet wide, of a buffalo grazing on the wide prairie. As real and detailed as a photograph, the image by Nancy Glaizer is called Birds of a Feather. This is the first piece the Haubs bought in 1983. It’s the painting that started the collection.

“It shows a group of bison in Yellowstone park,” said Fry.” Here you have this proud bison bull. He’s rendered in this photographic detail. But you have little birds resting on his back. It shows how he’s part of the whole ecosystem even though he’s this giant bull. These little tiny birds are still benefiting from his presence. It’s showing the whole cycle in Yellowstone.”

The Haubs, who are now in their 80s, both lived through WWII and avoided artworks with images of violence. Helga Haub says the couple never started off with a master plan for their art.

“We did not collect with vision of ever giving it to a museum. We only collected what we liked,” she said.

As artworks filled up the walls and shelves in their homes they started purchasing with more guidance from professional galleries. Some of the standout works include Gilbert Stuart’s portrait of George Washington. This is the image printed on the dollar bill. It’s from 1791 and is the oldest piece in the collection.

There is also Piñions with Cedar, the museum’s first painting by Georgia O’Keeffe. Fry says the painting of a bare leafed tree in the desert can be used as a bargaining chip.

“It will give us a greater ability to borrow from other institutions to bring really wonderful works here,” Fry said.

Marvin Oliver, a Seattle-based premier Native American printmaker and sculptor, is thrilled TAM has this collection, but says many of the paintings aren’t historically accurate. To really know what you are seeing Oliver says you need to read the labels to understand the context in which the pieces were made.

“Some people will say, ‘Gee, you know this is really glorifying the noble savage and the beautiful maiden,’ whatever, you know. But you don’t know what the intention is. it kind of puts it in a stereotypical category. It’s up to the museum to document and identify each and every piece that has the correct labeling. And they’ve done a pretty good job of that,” Oliver said.

Over the years Erivan And Helga Haub have supported other Tacoma institutions. They’ve contributed to the Museum of Glass, the LeMay Car Museum and the University of Washington’s Tacoma campus.

In a Seattle Times article about the Haubs in 1994, Erivan foreshadowed what we see today. He told the reporter, “If I construct anything, there it must be extraordinary, something Tacoma can be proud of.”