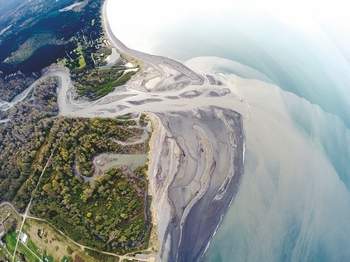 © Tom Roorda
NOW: The mouth of the Elwha River, pictured from the air April 6, has developed a complexity unknown before dam removal work upstream. 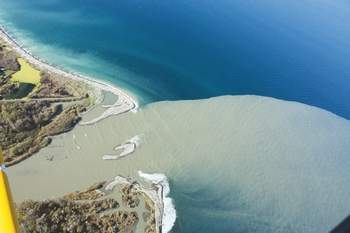 © Tom Roorda
THEN: Silt can be seen flowing out of the mouth of Elwha River in November 2010 even before dam removal began in September 2011 because of a release of water from lakes Mills and Aldwell.

PORT ANGELES — What does roughly 3.3 million cubic yards of sediment look like?

The ever-changing mouth of the Elwha River can offer some clue.

Between November 2012 and September 2013, about 3.3 million cubic yards, or 2.5 million cubic meters, of sediment once locked behind two massive dams along the river has built up at the mouth of the river, according to U.S. Geological Survey data estimates.

The river, which begins in the Olympic Mountains, empties into the Strait of Juan de Fuca west of Port Angeles.

Ocean currents in the Strait and the force of the river itself continuously shape the Elwha’s maw, with the landscape changing on a monthly and weekly basis.

Millions of cubic yards of sediment have been released from the bottom of the lakes that once bore the names Aldwell and Mills as part of the $325 million Elwha River dam-removal and restoration project begun in September 2011.

The 108-foot, century-old Elwha Dam, which once cradled Lake Aldwell, was completely removed by March 2012, while all but 30 feet remain of once-210-foot Glines Canyon Dam.

The sediment released by dam removal has built up so much at the river’s mouth that areas that were underwater before the dams were removed are now land for hikers.

“There has definitely been some added land, [some] new land created,” Miller said.

Miller is one of a battery of scientists scrutinizing the effects the restoration effort is having on the river’s body, mouth and surrounding environment.

Miller, who has been monitoring changes at the river mouth since dam removal began, said he will be part of a seven-person team the U.S. Geological Survey is organizing at the end of April to gather the most recent estimates of sediment built up there.

Miller said maybe 1 million cubic meters, or 1.3 million cubic yards, of sediment could have been added to the mouth this winter and early spring thanks to a wetter-than-normal February, another notch taken out of Glines Canyon Dam earlier this year and spring snow melt in the Olympic Mountains.

As sediment continues to course down the flowing Elwha, Miller said, the only sure thing about how the mouth looks is that it will change, likely for years to come.

Visit the mouth (watch where you walk!)

Want to see firsthand the dramatic ecosystem changes where the Elwha River spills into the open waters of Freshwater Bay?

From Port Angeles, go west on U.S. Highway 101 to its junction with state Highway 112.

Turn right (east), go down the hill to the Elwha Dike access point.

Day-use parking is available along the road (note the signs). Follow the Dike Trail a couple hundred yards to the mouth.

This is also a popular surfing spot. Respect private property in the area.

Miller was at the river’s mouth Friday with University of Washington senior Sarra Tekola. Tekola was taking samples of sediment accumulated there to test how much carbon is in the material.

The pair trudged through thick, slate-gray mud on the blustering day, almost losing a boot or two to the sucking muck.

“There are definitely places [that] are softer, and you just have to be sort of careful and test your footing before you put all your weight on it,” Miller said.

Tekola, who’s studying environmental science, said she’s interested in how carbon finds its way into the environment and wants to see how much of the substance a project on the scale of the Elwha River dams removal will release.