In Port Townsend, 12 ochre stars have died, while the illness eliminated a species from the tanks in Port Angeles. Both centers pipe in ocean water for their tanks. Experts believe the disease is infectious and might be caused by bacteria or a virus.

Caretakers at the Olympic Peninsula’s marine science centers don’t intend to replace sea stars until they feel more confident they can keep them alive. They also want to avoid taking breeding adults that might be needed to replenish wild colonies. 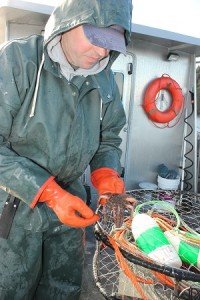 As part of their regular monitoring of crab populations the Puyallup Tribe of Indians is tracking the impact of a mysterious ailment that is decimating sea stars.

While there have been documented outbreaks before of the syndrome, nothing on this scale has ever been recorded. There is no known cause.

The tribe started regular crab surveys in April 2013. “Since then, we started seeing a lot of sea star by-catch,” said George Stearns, shellfish biologist for the tribe. “One pot near the north point of Vashon Island was literally full of sea stars.”

The tribe regularly monitors eight stations between the north end of Vashon Island and the Tacoma Narrows. Each station includes nine crab pots.

During the tribe’s early surveys, the sea star population seemed healthy. But, Puyallup tribal scientists recorded a sharp die-off in October. “We saw one monitoring site go from four sea stars per pot in April to 12 in September to zero all together in October,” Stearns said. “We went from catching over 100 sea stars to none within a month at that site.”

“Across the entire area we’re monitoring, we’re seeing a massive decrease in sea star bycatch,” Stearns said. “Some of the sea stars we are finding are literally melting in front of us.”

When a diseased sea star does catch a ride on a tribal crab pot, it deflates quickly. Within a few minutes, a normally rigid sea star will be hanging on the pot like a wet rag.

The main focus of the crab monitoring work by the tribe is to pinpoint exactly when the crab in the tribe’s harvest area molt, or shed their shells.

“Crabbing during the middle of molting, which makes them soft and vulnerable, can increase the handling mortality,” Stearns said. “Its a common practice to shut down harvest during the molt. But, we’ve only had a general idea of when that occurs down here.”

The data collected will also help the fisheries managers put together a more complete picture of crab populations in the South Sound. “We GPS the locations so we’re at the same spots and put the pots in for the same length of time,” Stearns said. “So, we know we’re comparing apples to apples each month.”

Sea star immediately after being caught. Photo by George Stearns. 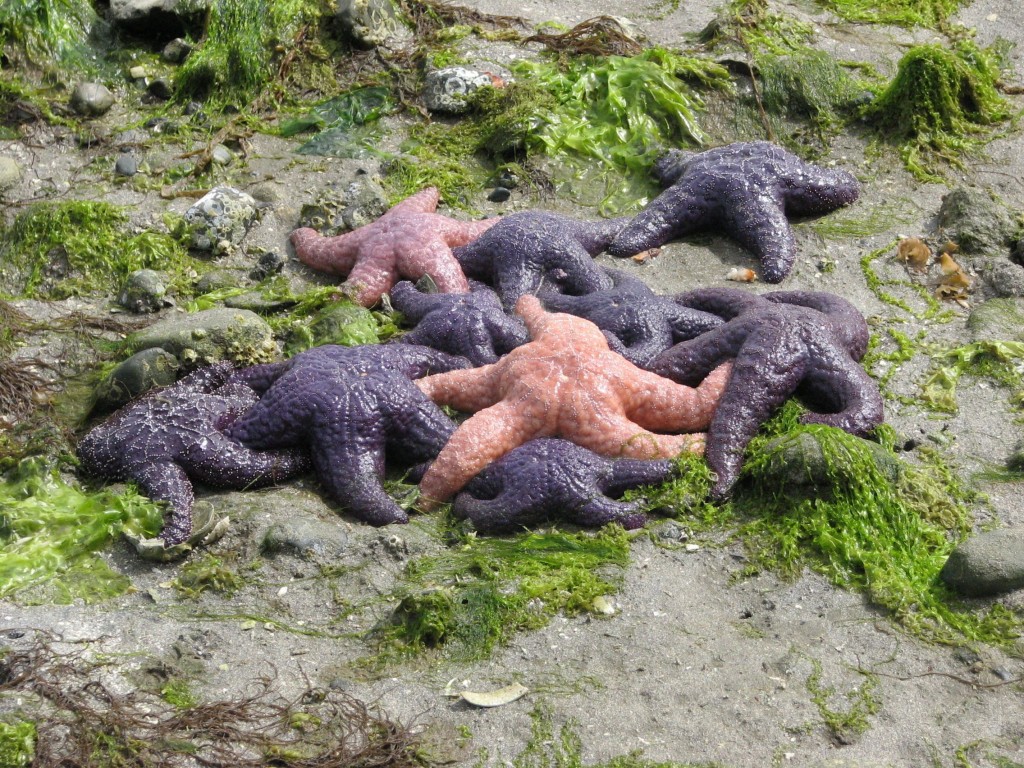 D. Gordon E. Robertson / Wikipedia
Ochre sea stars have been dying off, and biologists are unsure why.

MUKILTEO — It’s an iconic summertime image in the Northwest: children playing on the shoreline at low tide, shoveling sand into plastic pails while purple and orange sea stars cling to exposed rocks nearby.

On some beaches this summer, that scene likely will be missing the sea stars.

A mysterious condition is killing sea stars — commonly known as starfish — by the thousands all along the Pacific Coast of North America, from Alaska to Baja California.

The ochre sea star, the colorful type often seen clinging to those rocks, is one of the hardest-hit species, said Drew Harvell, a Cornell University biology professor working on the problem for the University of Washington’s Friday Harbor Laboratories.

Sea stars, she said, “are emblematic; people have them on their T-shirts, for heaven’s sake.”

Local populations in the inland waters of Western Washington — including in Mukilteo and Edmonds — have been nearly wiped out just in the past few months, researchers and divers say.

The stars are turning to jelly and disintegrating. A group of researchers is working to find out why.

“It’s extremely difficult to pinpoint the exact cause,” said Ben Miner, an associate professor of biology at Western Washington University in Bellingham.

He recently collected samples of sick and dead sea stars in Mukilteo and Edmonds.

The prevailing theory so far, Harvell said, is that the deaths are being caused by a pathogen, bacteria or a virus, as opposed to a broader environmental condition such as ocean acidification.

Other types of organisms are not experiencing similar death rates, she said. The scourge has been more pronounced in inland waters than on the outer coast.

Populations in Oregon, compared to those in Washington and California, have mostly been spared.

Some inland waters have been hit hard by the die-off, while other areas, such as the harbors at Langley and Coupeville on Whidbey Island, still have healthy populations, Miner said.

While the evidence so far points to a pathogen, “that certainly doesn’t preclude the possibility that there are other things in the water that are weakening their immune systems and allowing them to get sick,” Miner said. “It has the potential to be a combination.”

If it is bacteria or a virus, it’s uncertain whether humans are contributing to the problem, Harvell said.

“Once we know what it is, we’ll have a much better idea of what the answer to that is,” she said.

Another theory is that the condition is caused by radiation that has drifted across the ocean from the nuclear power plant in Fukushima, Japan, which suffered a meltdown after the March 2011 earthquake and tsunami.

If that were true, many more creatures would be affected, researchers said.

“It’s unlikely to be the direct cause,” Miner said.

There are several hundred species of sea stars worldwide and about 25 in the Pacific Northwest, he said.

“About half of those species appear susceptible,” Miner said.

Large “sunflower” stars, which have up to 20 arms and can be more than 3 feet across, have taken the brunt of the plague along with the ochre stars, Harvell said.

Kimber Chard, of Edmonds, a scuba diver who frequents the waters of Edmonds and Mukilteo, said he began noticing dying sea stars about nine months ago.

“The sunflower stars used to be everywhere,” Chard said. He used to see up to 30 of them per dive. Now it’s down to two or three.

“There used to be so many of them, and they’re just so few.”

Sea stars are echinoderms, in the same phylum as sea urchins, sand dollars and sea cucumbers. Sea stars are voracious eaters, sucking down clams, mussels, barnacles, snails, other echinoderms and even each other, researchers said. As a result, their losses could send big shock waves through the food chain.

Scientists at universities along the West Coast and at Cornell in Ithaca, N.Y., have teamed with aquariums and divers to work on the problem.

Miner is placing healthy sea stars in tanks with sickly ones to test the contagiousness of the condition. Samples of sick stars are being tested at a marine lab on Marrowstone Island near Port Townsend. Some are frozen, preserved and sent to Cornell researcher Ian Hewson.

“He has the capability to test for bacteria and viruses and he’s worked incredibly hard all fall,” Harvell said.

Miner said he hopes to have some study results to report within a couple of months.

“We’re just watching which way it goes and how fast it goes,” he said.